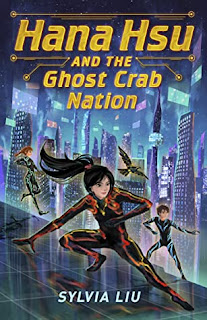 Sylvia Liu’s Hana Hsu and the Ghost Crab Nation was engaging and epic. I wasn’t intending to read it in a single day, but once I started I simply could not stop. There are so many elements of the book to rave about, but I’ll limit my review to some of my favorites (especially those that aren’t a spoiler risk). To give you a broad overview of what the book is about, Ms. Liu tackles the idea of “What would happen if science progressed to the point where we could link the human brain to the internet?” It’s one hundred percent a science fiction novel, but like many sci-fi books, there is an aspect where we aren’t that far away from the technology featured becoming today’s reality.

The Sun Tzu references in the book were awesome. Hana and the other Start-Up students learn a lot of things like war tactics while they are in their classes, and Sun Tzu was by far the most commonly quoted “teacher” in the book. There were even some quotes from The Art of War that I had forgotten. The author also embeds some science lessons into the book, with references to physics, biology, chemistry, neurology, and computer science among other things. Despite the use of a lot of very big words (i.e. Ophiocordyceps, the zombie ant fungus) I never had an issue understanding things. Of course, as someone who is older than the intended audience, I can’t really speak to how well it will go for a true middle school reader but for the most part, I think they will be ok.

One of the most striking quotes in the book to me was: “Hana had never lived in a world where Chinese culture, wasn’t popular, and she couldn’t imagine what it would be like to feel like it wasn’t cool.” You can easily switch the word “Chinese” out for “Western”, and you would have the culture in the present. To me, it was a subtle reminder to check my privilege. As a young adult white woman in the United States, I’ve never lived in a world where the culture I most closely identify with wasn’t popular. I have to remind myself that others don’t have the same experience. I’m pleased that this book was so thought-provoking and provided that opportunity.

Overall, Hana Hsu and the Ghost Crab Nation is a fantastic upcoming middle-grade sci-fi release. I would happily recommend it to young readers I know, and those who want a book that is both educational and entertaining. If you like books like Yoon Ha Lee’s Dragon Pearl or Kwame Mbalia and Prince Joel Makonnen’s Last Gate of the Emperor, then you should definitely enjoy this book. I’m eager to read what Sylvia Liu releases in the future after finishing Hana Hsu and the Ghost Crab Nation! At the time of writing this review, it is unclear to me whether this book is intended to be standalone or part of a series but I would be satisfied either way.

Thank you to the author, the publisher Razorbill, and NetGalley for providing me with a complimentary review copy of the book. I appreciate the opportunity to read and review Hana Hsu and the Ghost Crab Nation immensely. Please note - I voluntarily read and reviewed the book. All opinions expressed in the review are my own and not influenced in any way. 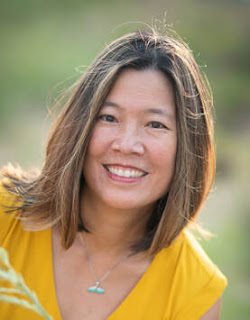 My works include Hana Hsu and the Ghost Crab Nation (Razorbill, Summer 2022); Manatee's Best Friend (Scholastic, 2021); A Morning with Grandpa, illustrated by Christina Forshay (Lee & Low Books 2016); a spidery poem in Thanku: Poems of Gratitude, edited by Miranda Paul, illustrated by Marlena Myles (Lerner Books 2019); art in the Virginia Museum of Contemporary Art New Waves 2012 exhibit; and art and infographics in Huffington Post, Oceana, and World Wildlife Fund.  ​I co-founded Kidlit411, a resource website for children's writer and illustrators.I grew up in Caracas, Venezuela, went to Yale College and Harvard Law School, and was lucky to do what I loved for over a decade, protecting the oceans at the U.S. Department of Justice and the non-profit group Oceana. Now I'm even luckier, spinning stories for kids. I live in Virginia Beach with my family and a floofy cat. I'm represented by Jennifer March Soloway at Andrea Brown Literary Agency.
Author Photo Credit: K. Woodard Photography