Hi all! I'm pleased to be hosting a spot with TBR and Beyond Tours on the Castles in their Bones by Laura Sebastian blog tour. Make sure to check out the other tour host's pages and show them some love!
Castles in their Bones Blog Tour Schedule (TBR and Beyond Tours)
*Please note - this post contains affiliate links that may earn us a commission (at no additional cost to you) if you make a purchase.
About the Book 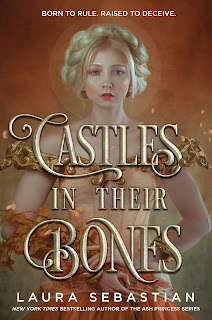 A spellbinding story of three princesses and the destiny they were born for: seduction, conquest, and the crown. Immerse yourself in the first book in a new fantasy trilogy from the author of the New York Times bestselling Ash Princess series.

Empress Margaraux has had plans for her daughters since the day they were born. Princesses Sophronia, Daphne, and Beatriz will be queens. And now, age sixteen, they each must leave their homeland and marry their princes.

Beautiful, smart, and demure, the triplets appear to be the perfect brides—because Margaraux knows there is one common truth: everyone underestimates a girl. Which is a grave mistake. Sophronia, Daphne, and Beatriz are no innocents. They have been trained since birth in the arts of deception, seduction, and violence with a singular goal—to bring down monarchies— and their marriages are merely the first stage of their mother’s grand vision: to one day reign over the entire continent of Vesteria.

The princesses have spent their lives preparing, and now they are ready, each with her own secret skill, and each with a single wish, pulled from the stars. Only, the stars have their own plans—and their mother hasn’t told them all of hers.

Life abroad is a test. Will their loyalties stay true? Or will they learn that they can’t trust anyone—not even each other?

Castles in their Bones by Laura Sebastian is a first-class young adult epic fantasy with a superb mix of political intrigue and romance. With a fast paced-plot and lots of action, I found little to critique in the story.

The story follows three princesses, Beatriz, Daphne, and Sophronia who are being prepared to be sent to neighboring kingdoms and become queens in their own right. Their mother, Empress Margaraux, has trained her daughters their entire lives to become spies and saboteurs so she can ultimately take over the continent. However, when the princesses arrive at their new homes it becomes evident that their plans will not be as easy to execute as they might have hoped.

I loved how elements of the story were influenced by real-life royal families. For example, some of the events of the book seemed to be influenced by the history surrounding the Tudor family. I was also appreciative of the female-driven storyline. Despite the fact that Empress Margaraux is power-hungry and gives very questionable advice to her daughters, she was the one to cement her power base and is obviously not just a figurehead. Her character reminded me a lot of Catherine the Great, and stories with strong female characters are always some of my favorites. I’m excited to see where the author takes her as a villain in future books.   Even though each sister is placed in a position of power, they have very different issues to deal with in their new homes. The story is told primarily from their perspectives, and while this may have caused an issue for some authors Ms. Sebastian wove it together seamlessly.

The magic system was another highlight of the story. I enjoyed how Ms. Sebastian highlighted the differences in each country’s view on magic. For example, one of the princesses has to hide her oddly colored silver eyes because they would not be well received by those in her new home. “Stardust” was very tightly interwoven with the politics of each individual kingdom and how they interacted with the other kingdoms.

I would recommend this book to young adult fantasy readers who would enjoy a story told from multiple points of view, and love all the drama and conflicts that come with royalty. Beware the cliffhanger at the end of the book - I NEED the second book ASAP after how this one ended. I’m really sad that details of the sequel have not been announced yet, but I also have to remember that I’m reading this book before it’s even been released so *shrug*

Thank you to the author, the publisher at Delacorte Press, the team at TBR and Beyond Tours, and NetGalley for allowing me to read an early copy of this book. I appreciate the opportunity to read and review Castles in their Bones immensely. Please note - I voluntarily read and reviewed Castles in their Bones. All opinions expressed in the review are my own and not influenced in any way. 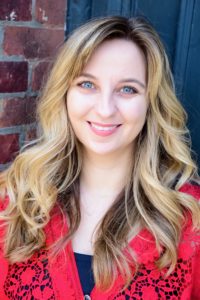 Laura Sebastian was born and raised in South Florida (the Redlands and Key Largo) and has always loved telling stories–many apologies to her little brother who often got in trouble because of them. She got her BFA in Performing Arts from Savannah College of Art and Design before realizing she preferred the other side of storytelling.

When Laura isn’t writing, she’s probably reading, cooking/baking, or buying more clothes than her overstuffed closet can fit. She currently lives in London with her two dogs, Neville and Circe.

Her New York Times Bestselling series, Ash Princess, is out now from Delacorte (Penguin Random House. Keep an eye out for her debut adult fantasy book, Half Sick Of Shadows, out Summer 2021, and the first book in her new YA series, Castles In Their Bones.